The False David has been first played 1997. Since then it has passed several transformations, especially with different musicians.

The False David is neither a hero nor a fighter. Rather he´s rising from the shadow of our being. Where the pain of being born, echoes in an infinite reverberation. Where ascension implies falling, joy drowns in pain and death embraces life. In the eternal return he finds his freedom. 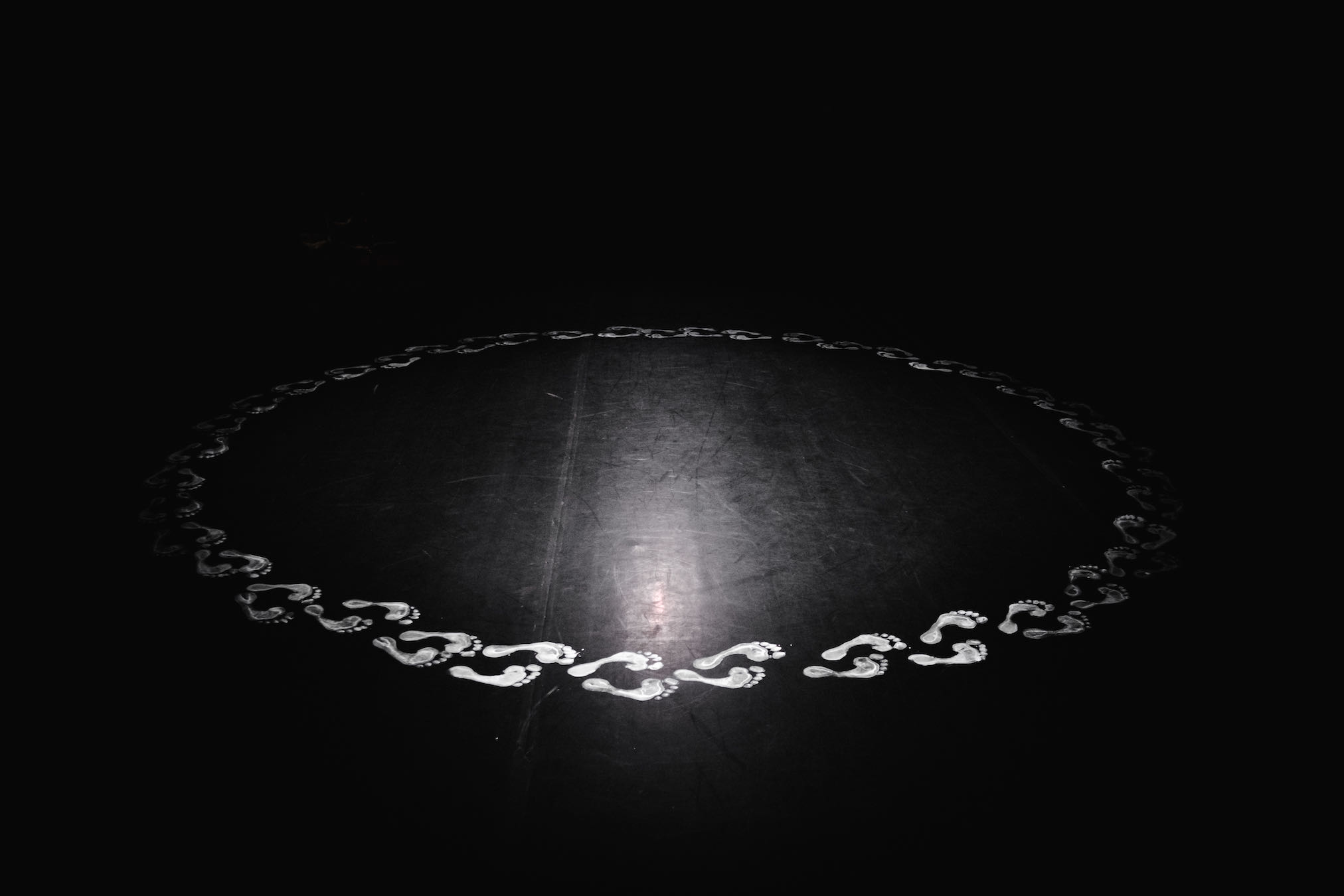 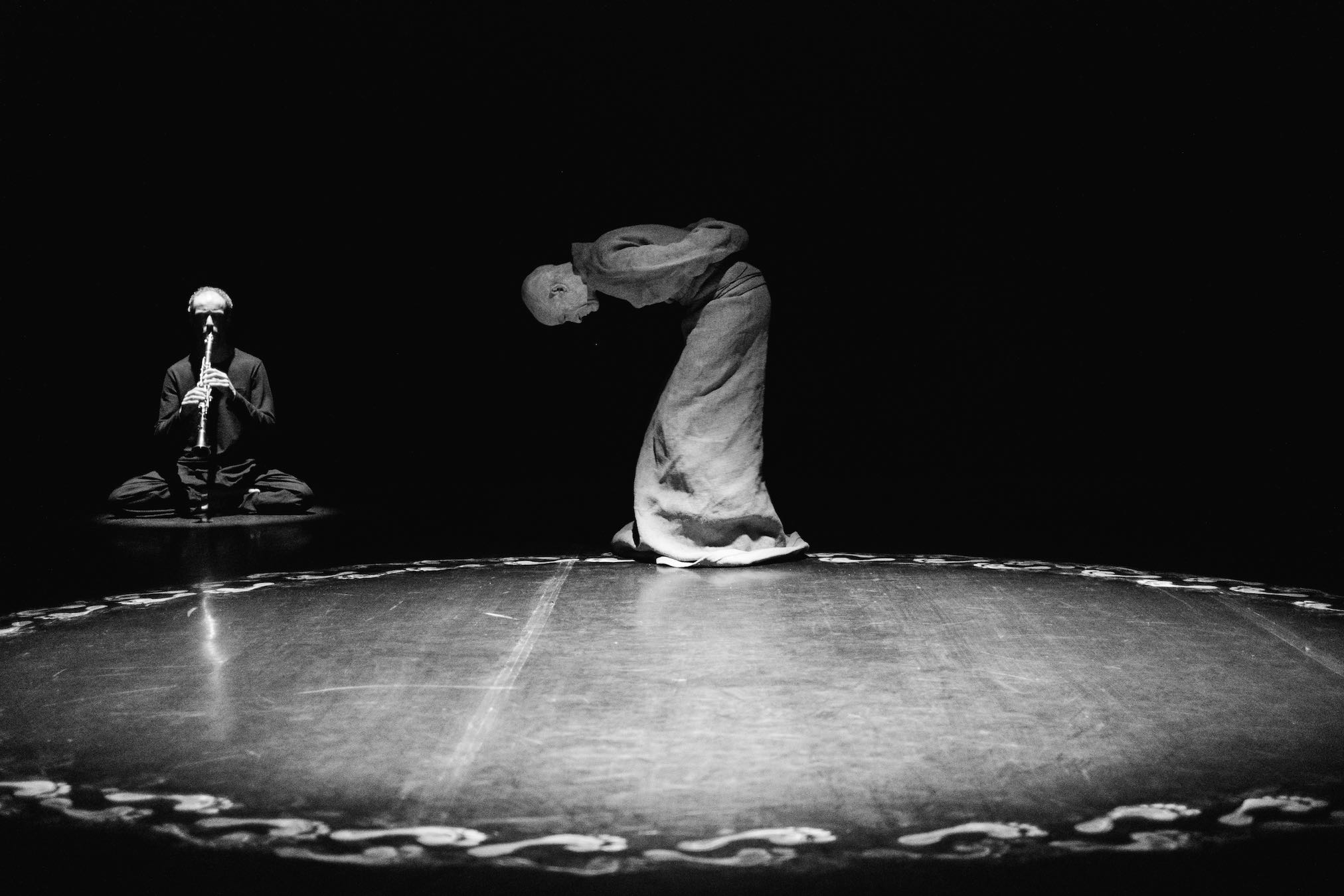 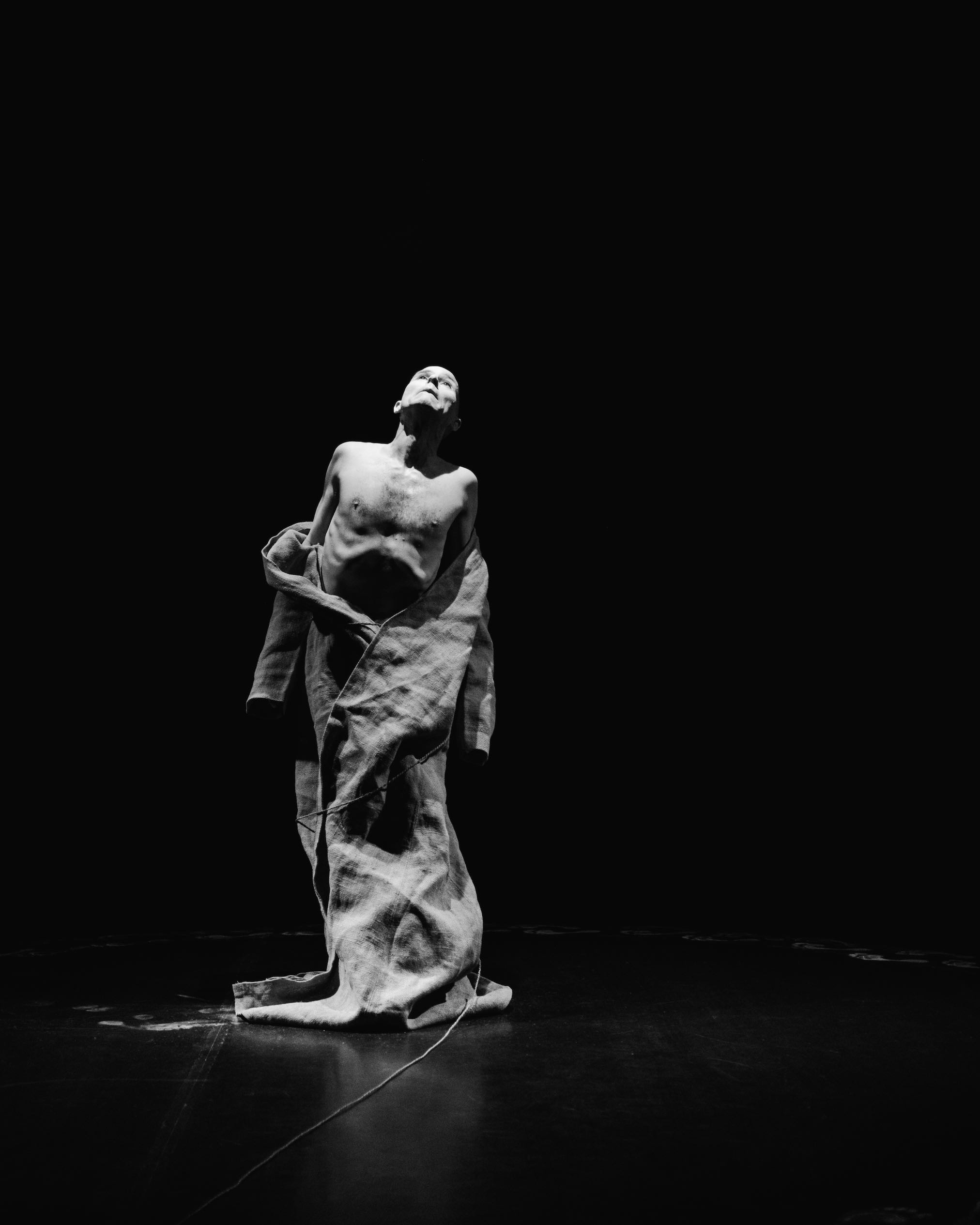 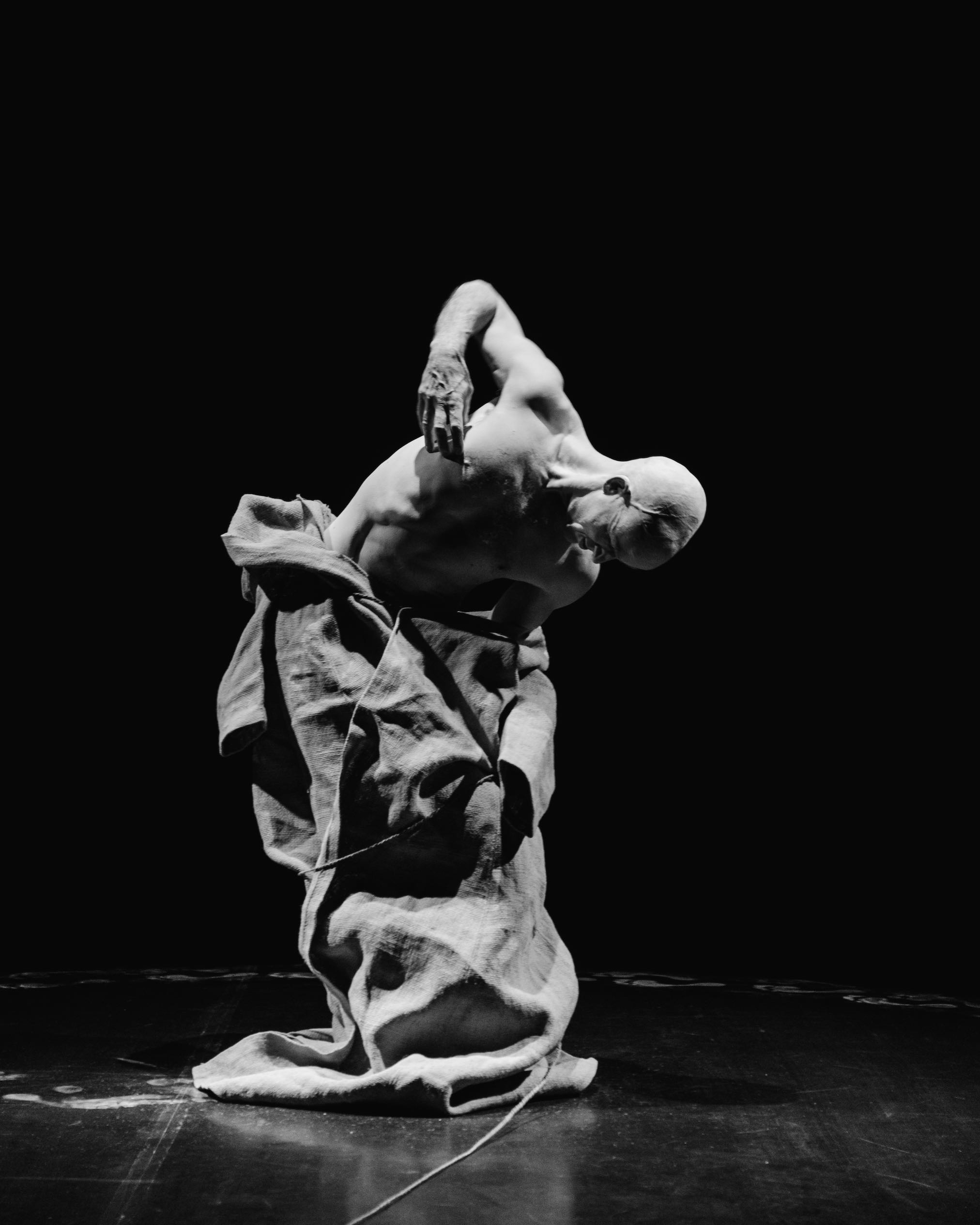 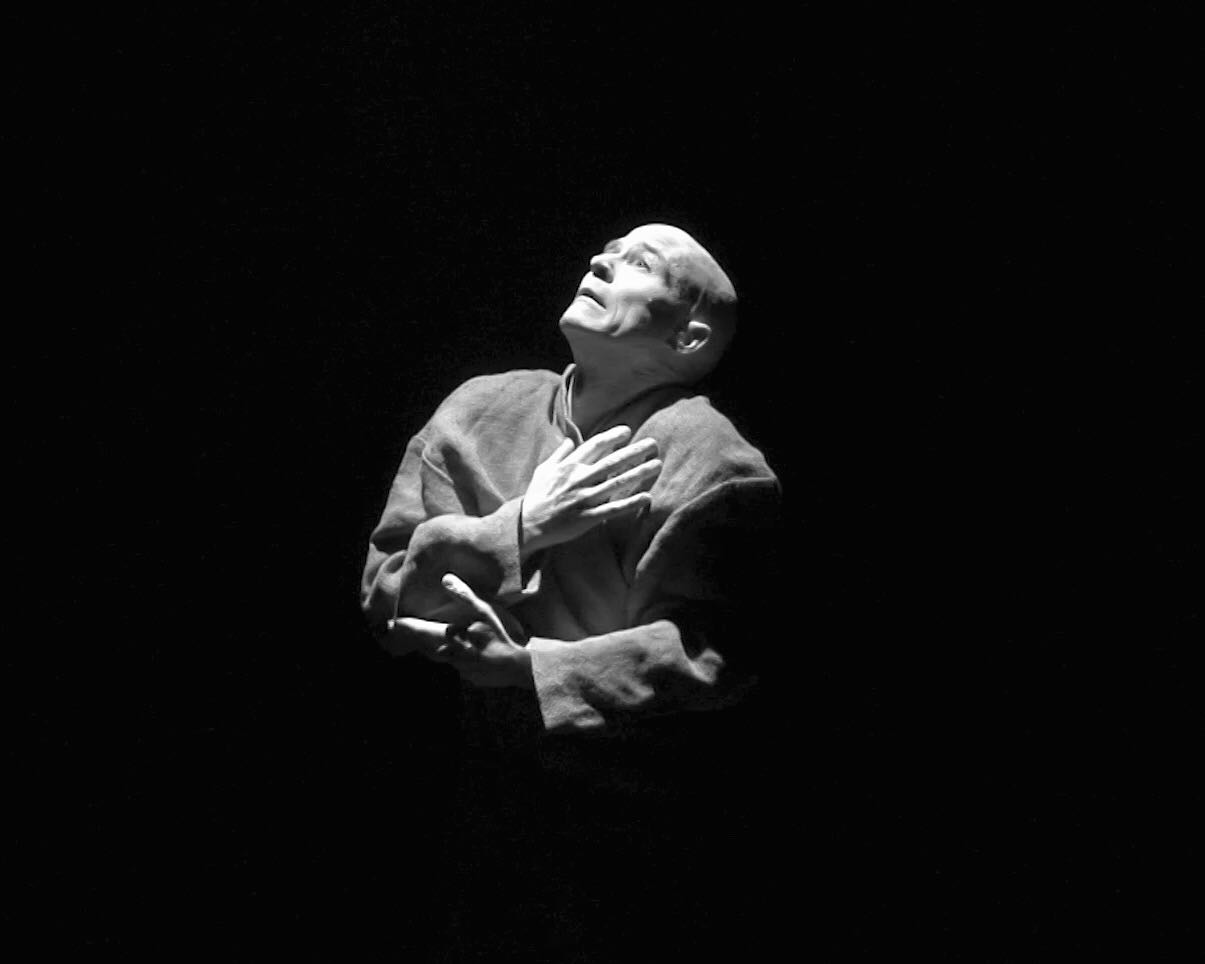 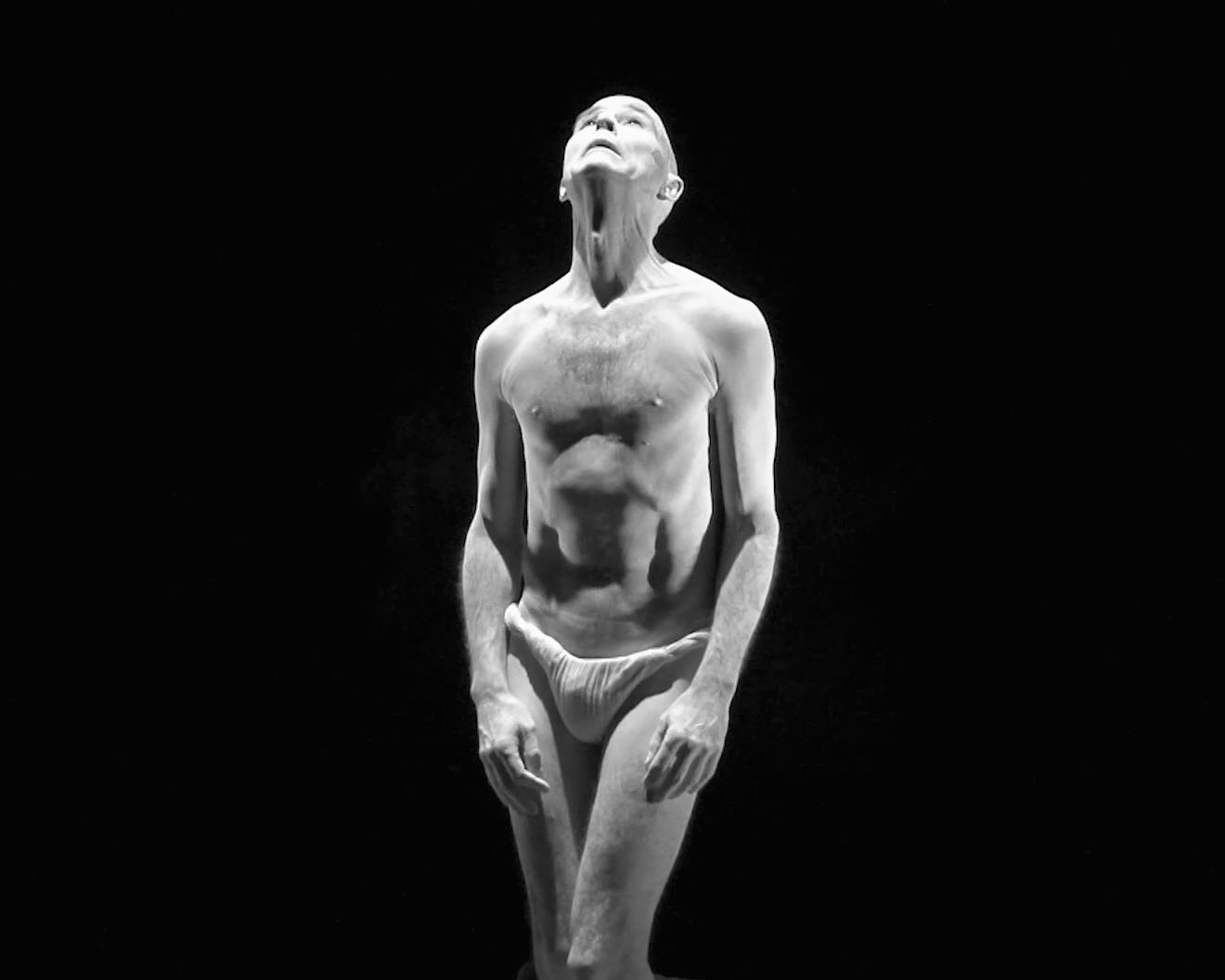 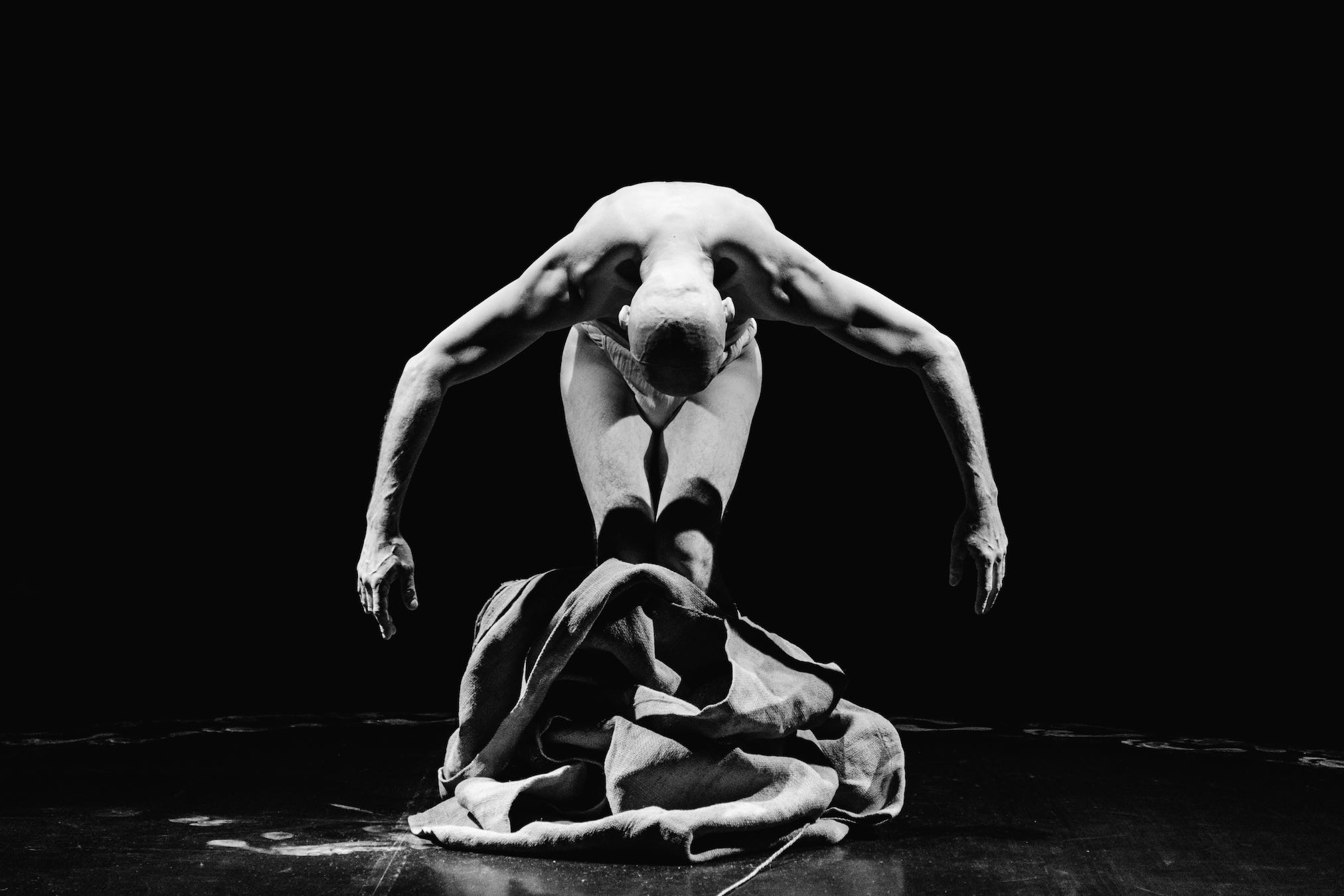 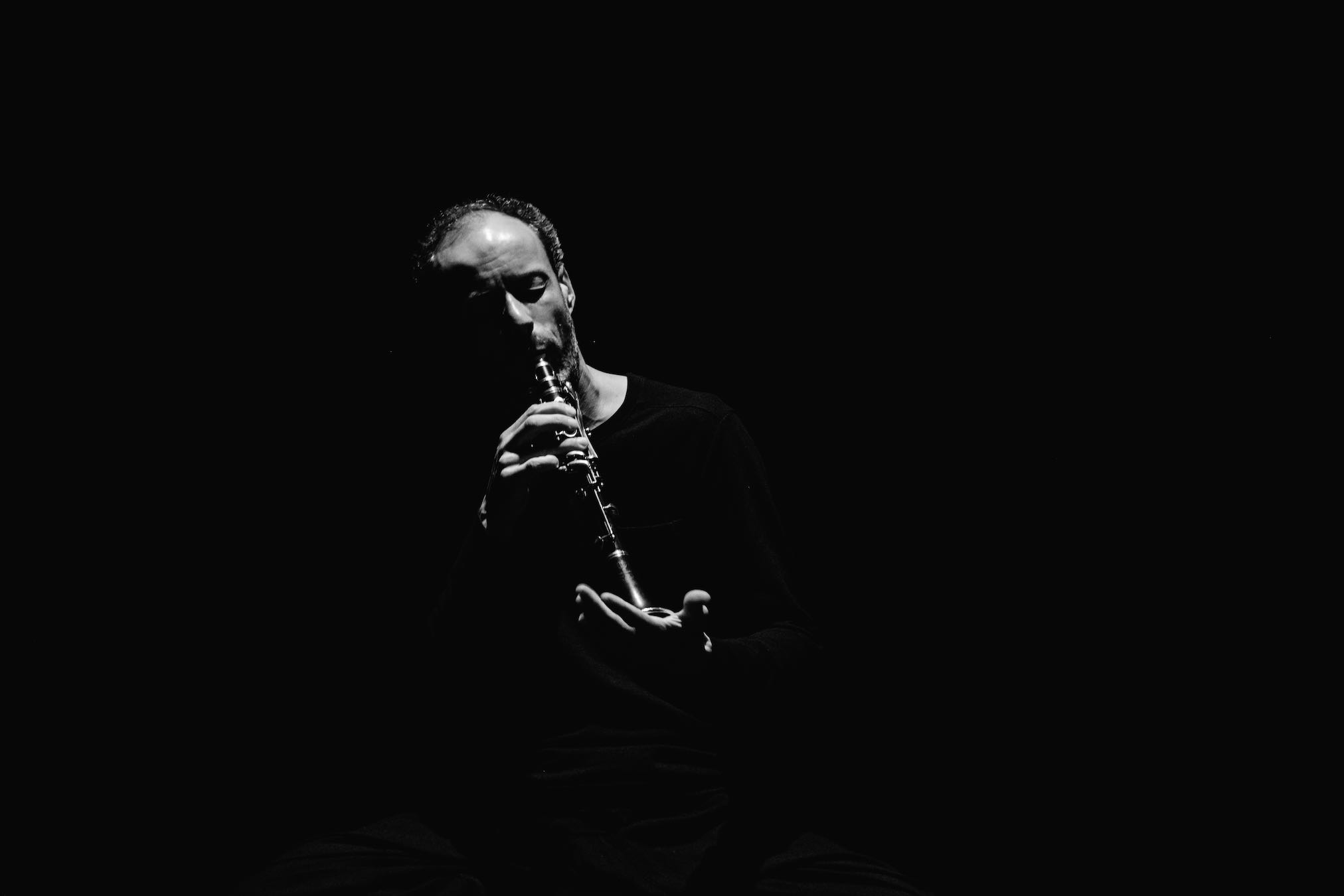 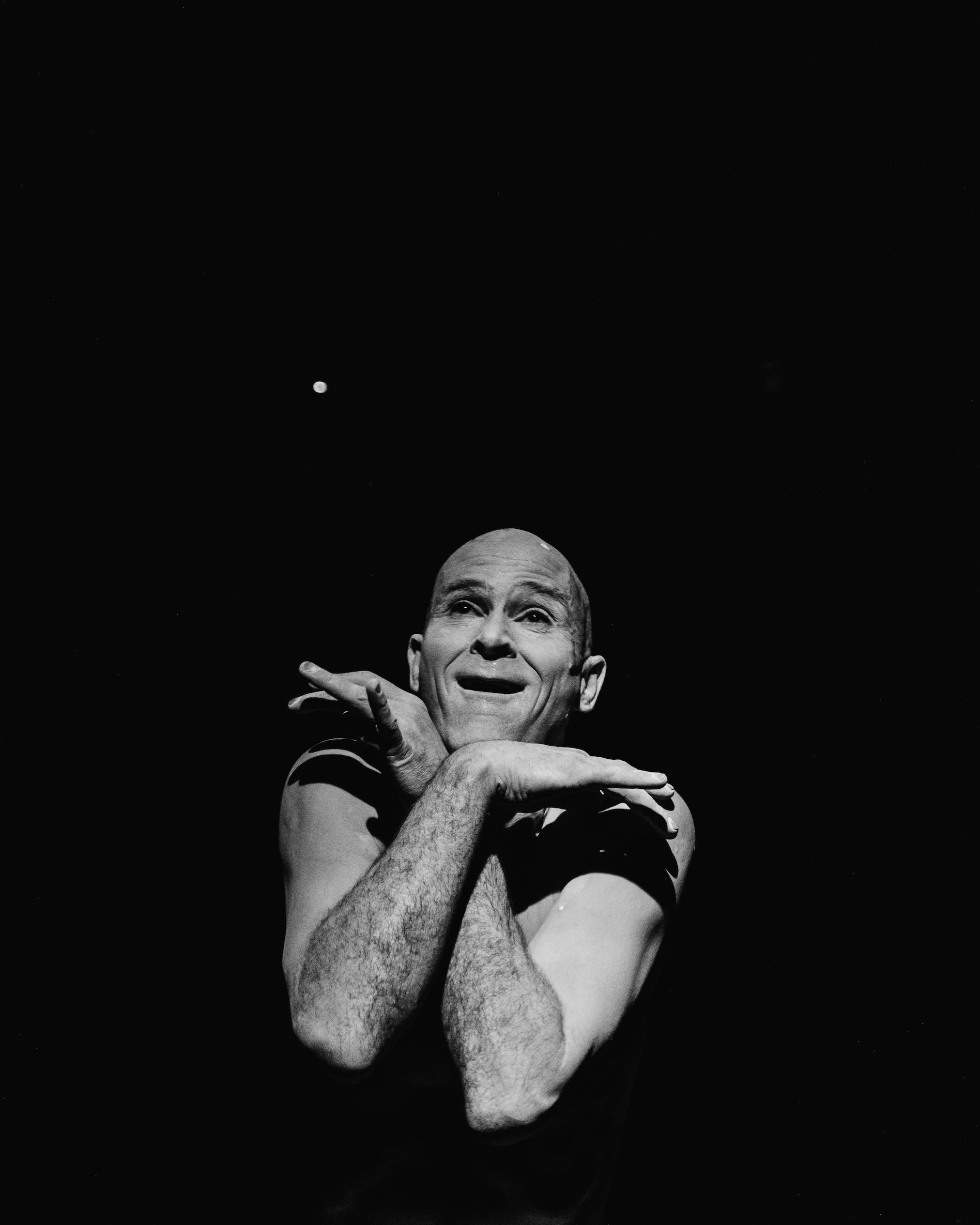 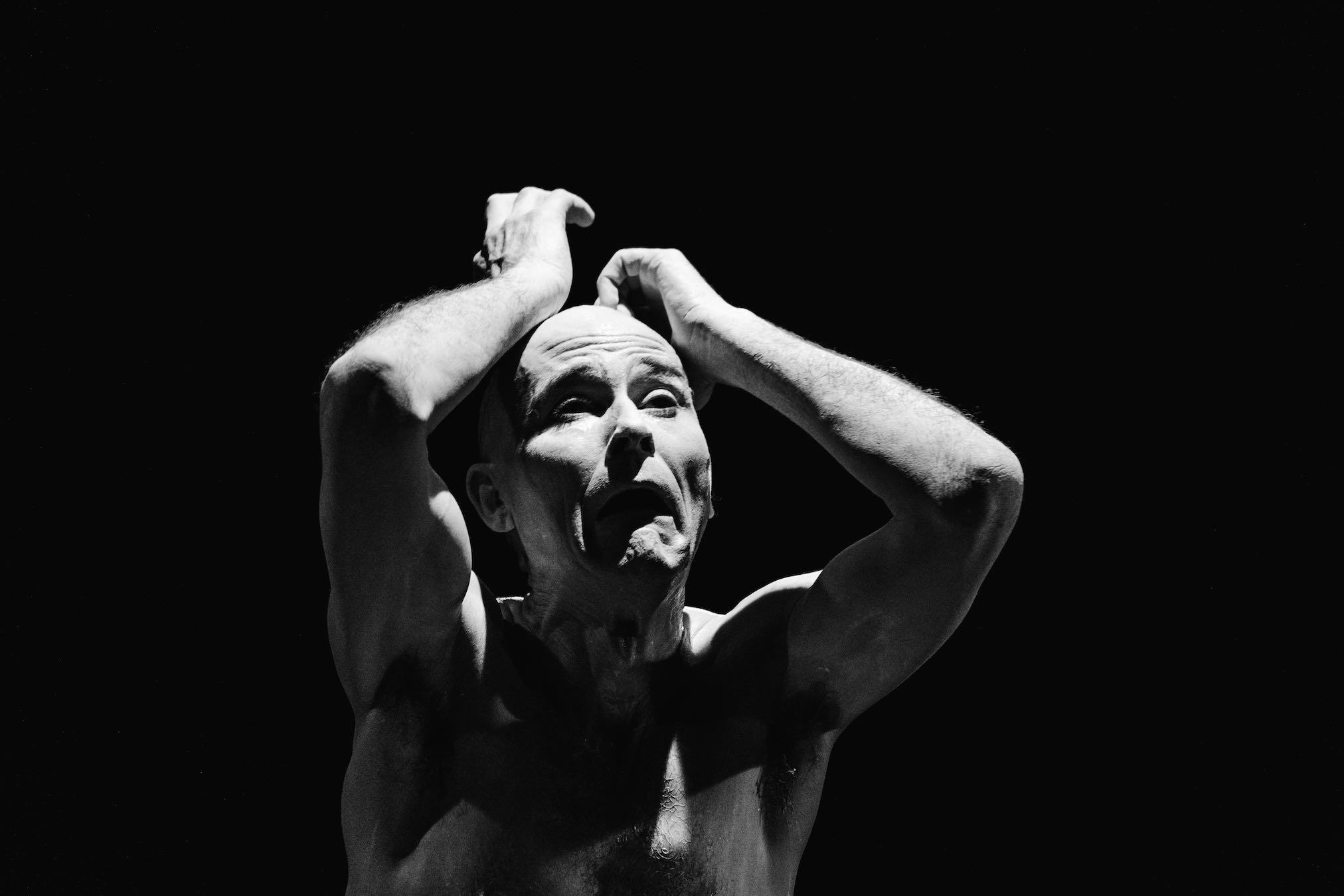 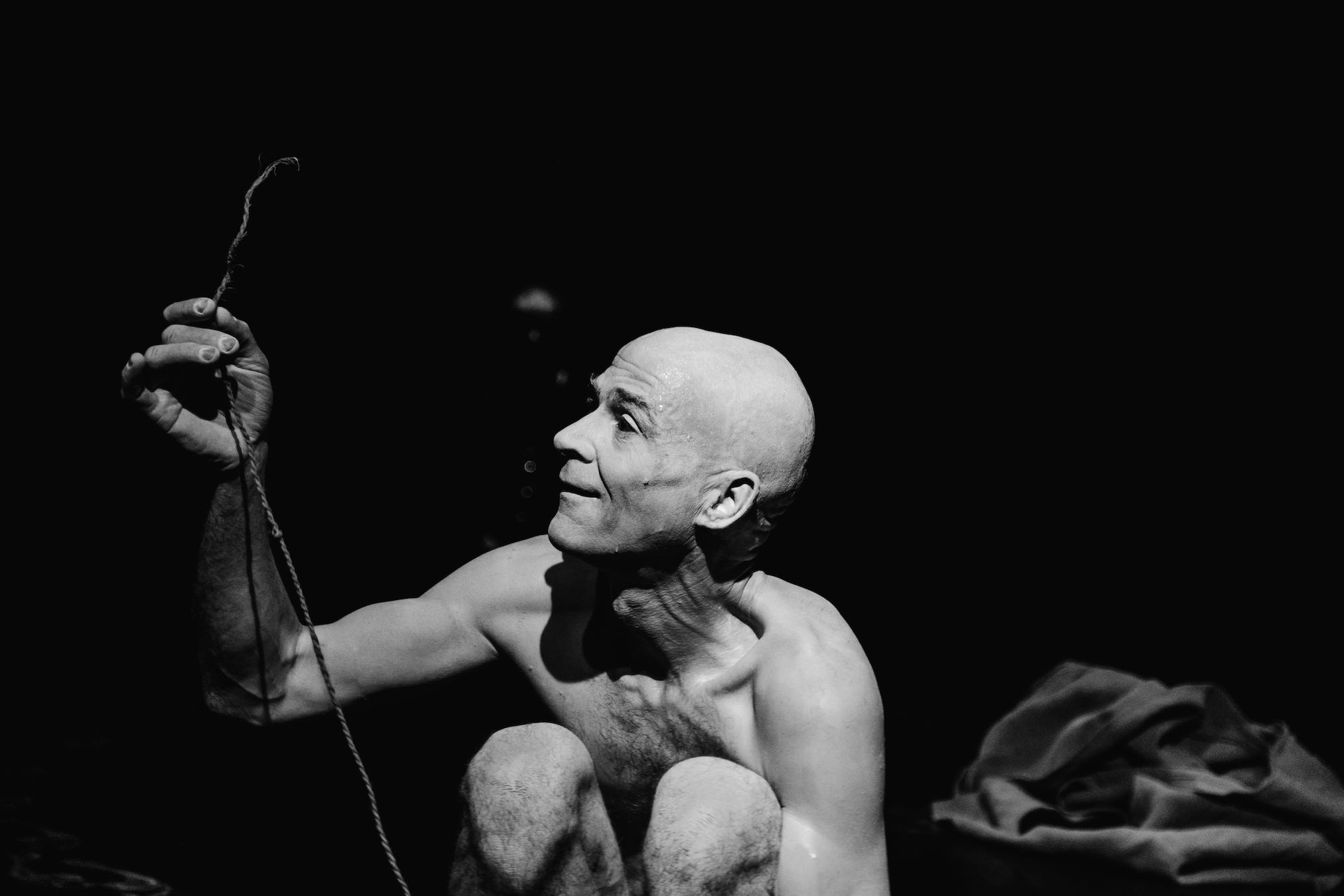 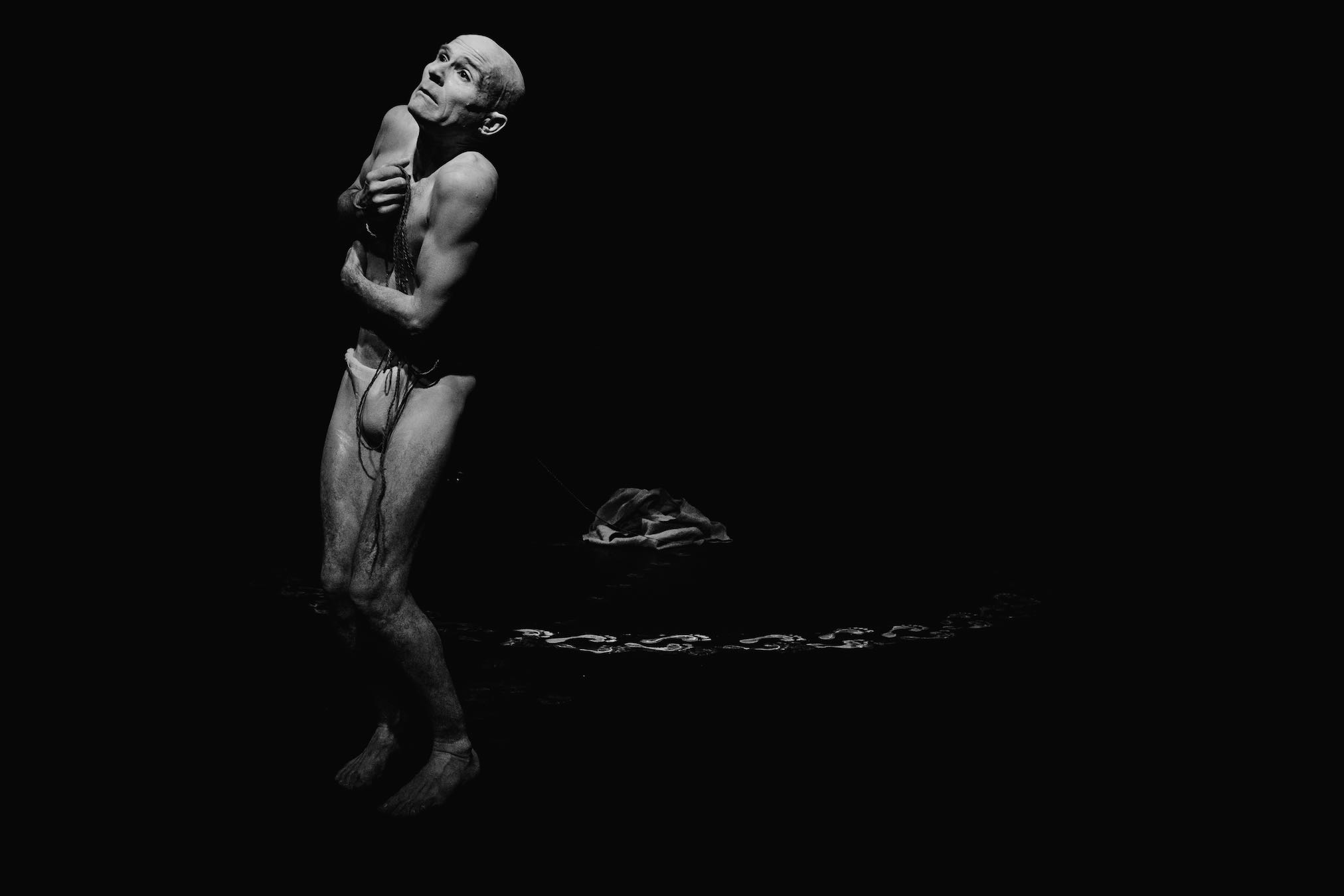 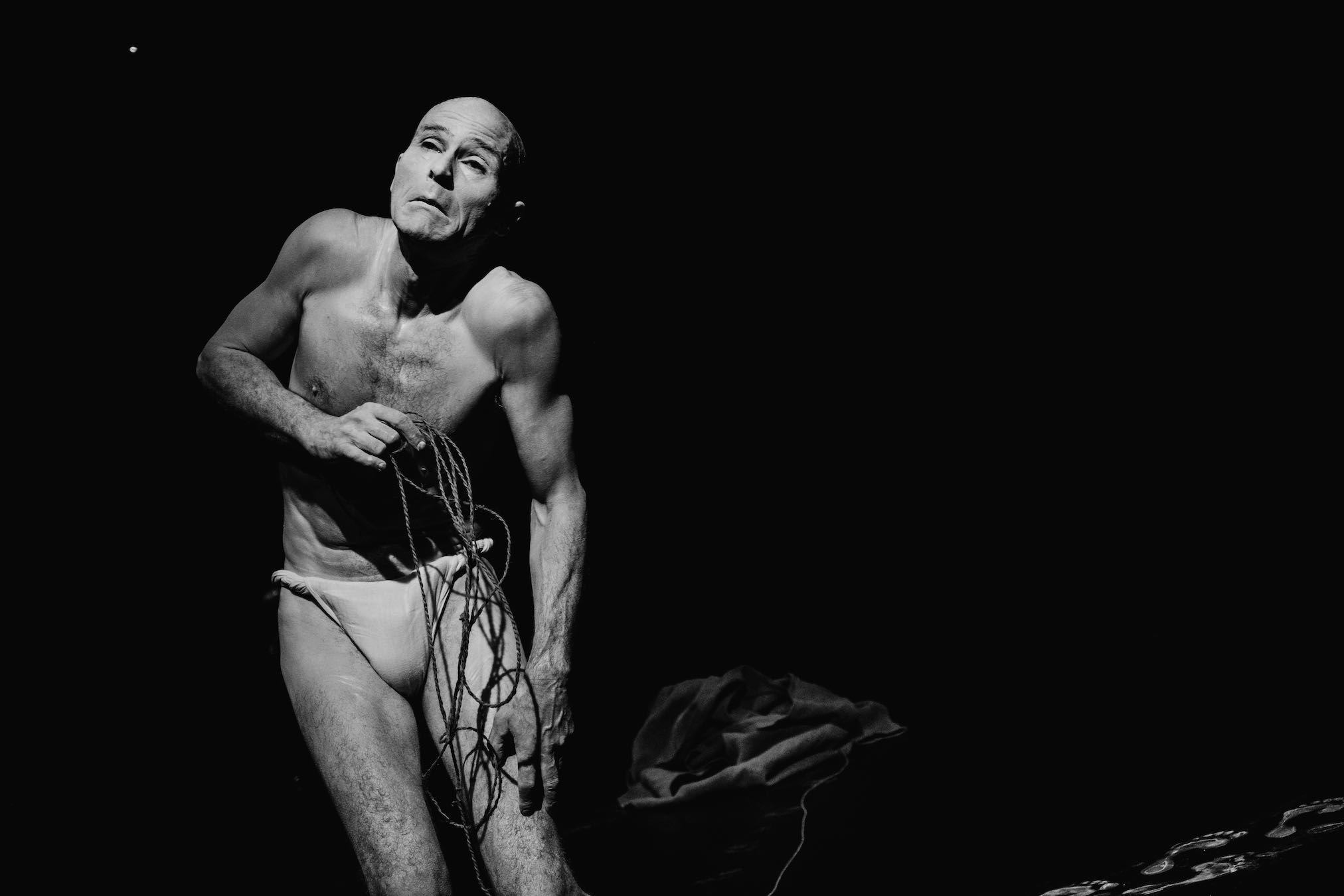 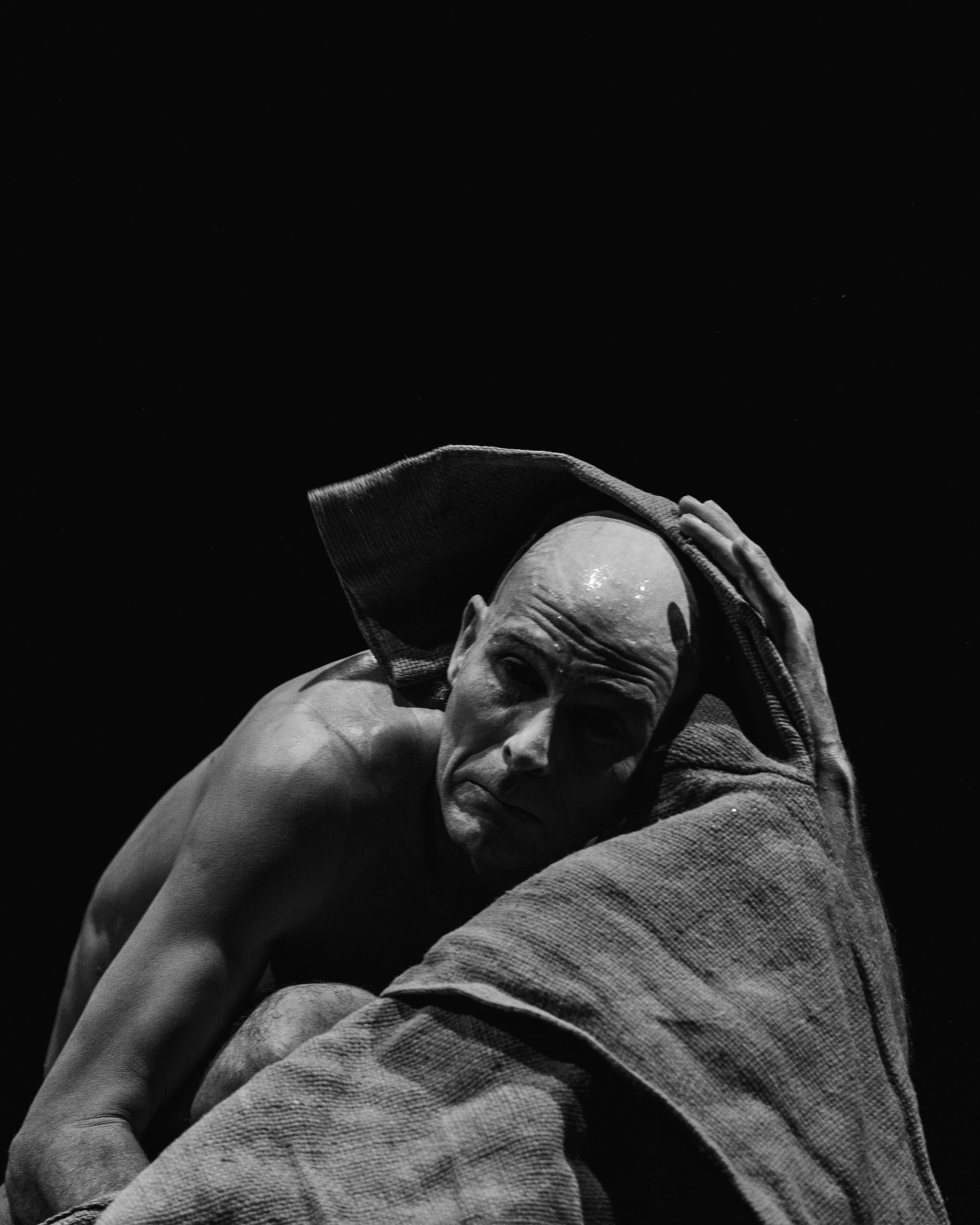 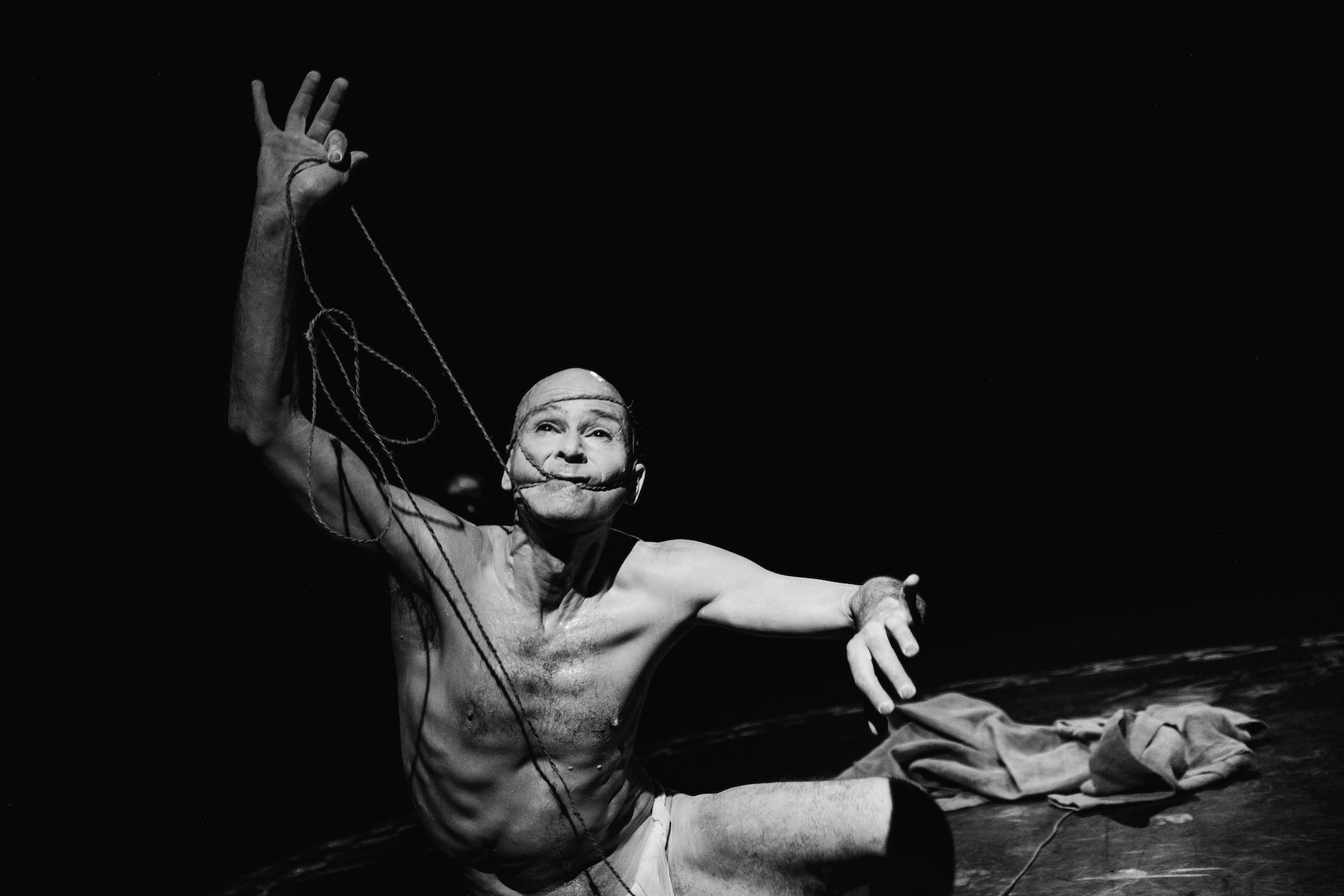 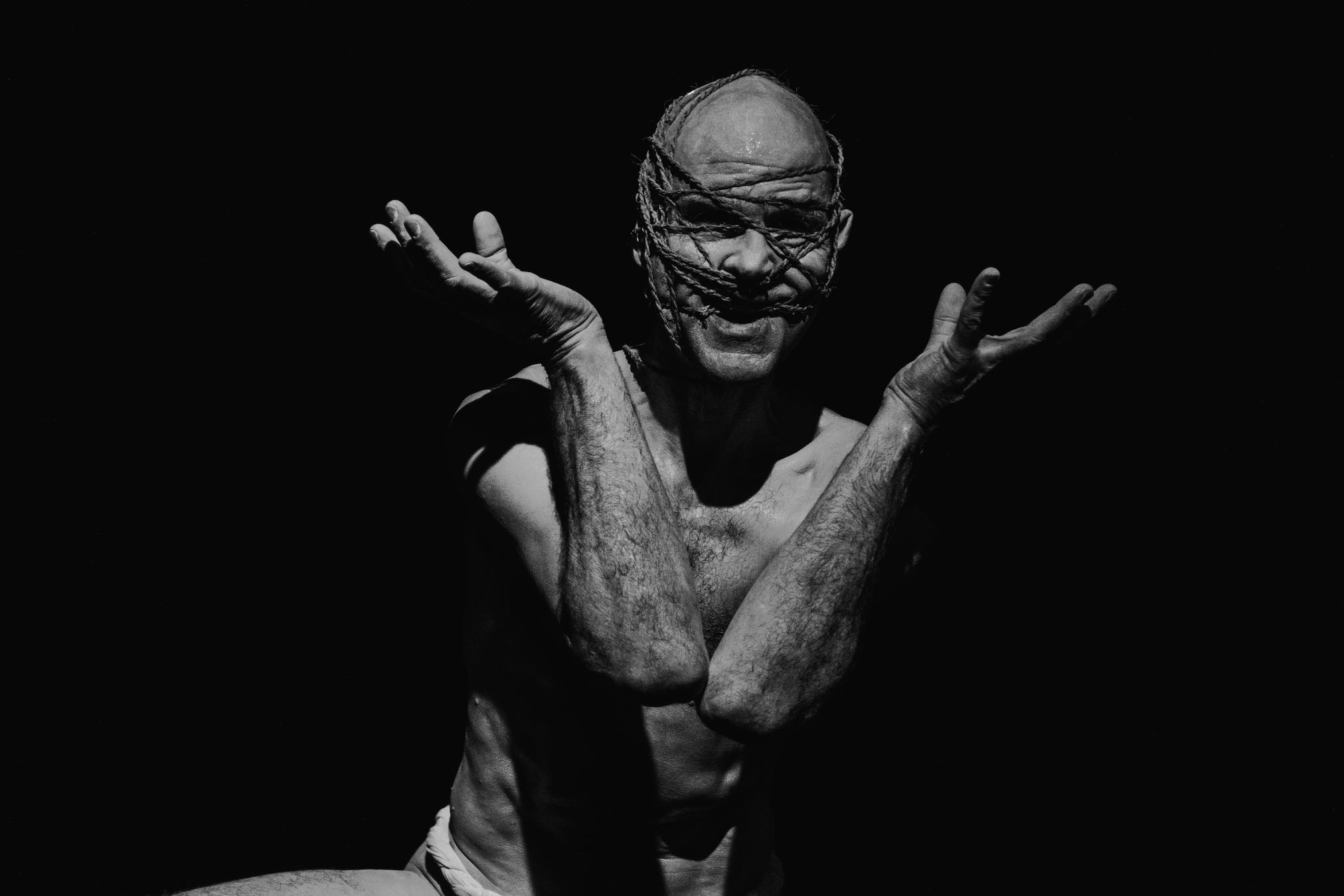 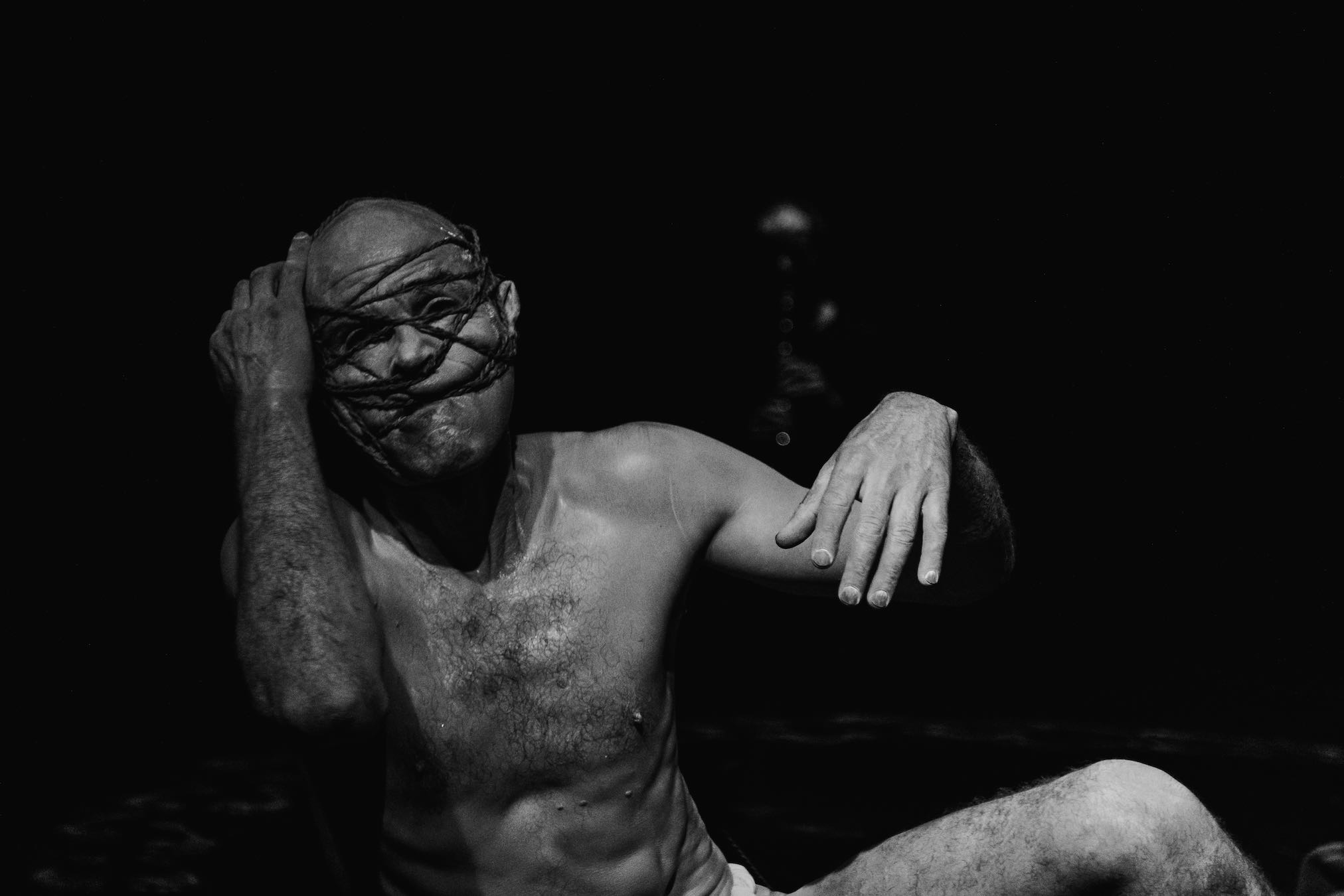 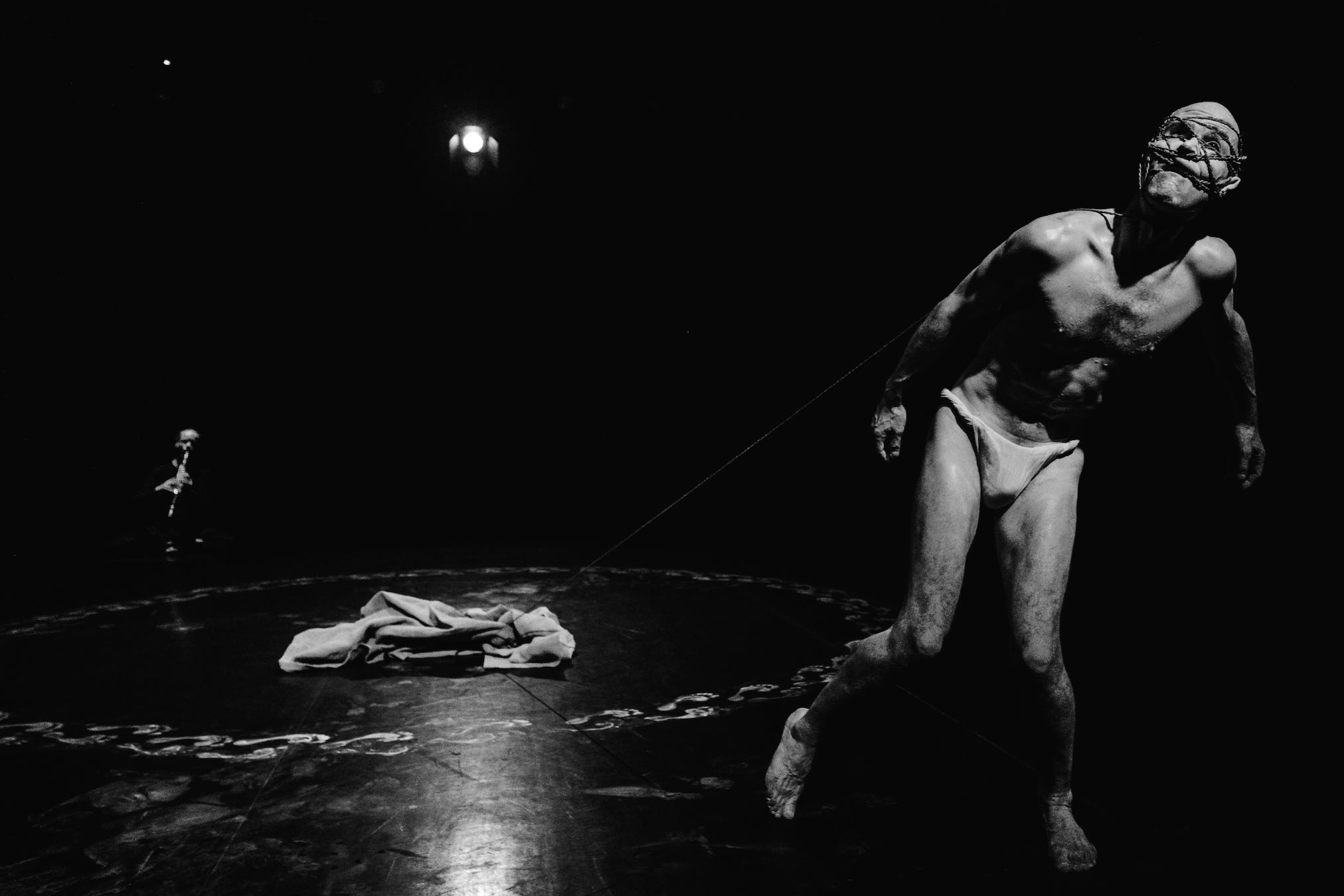 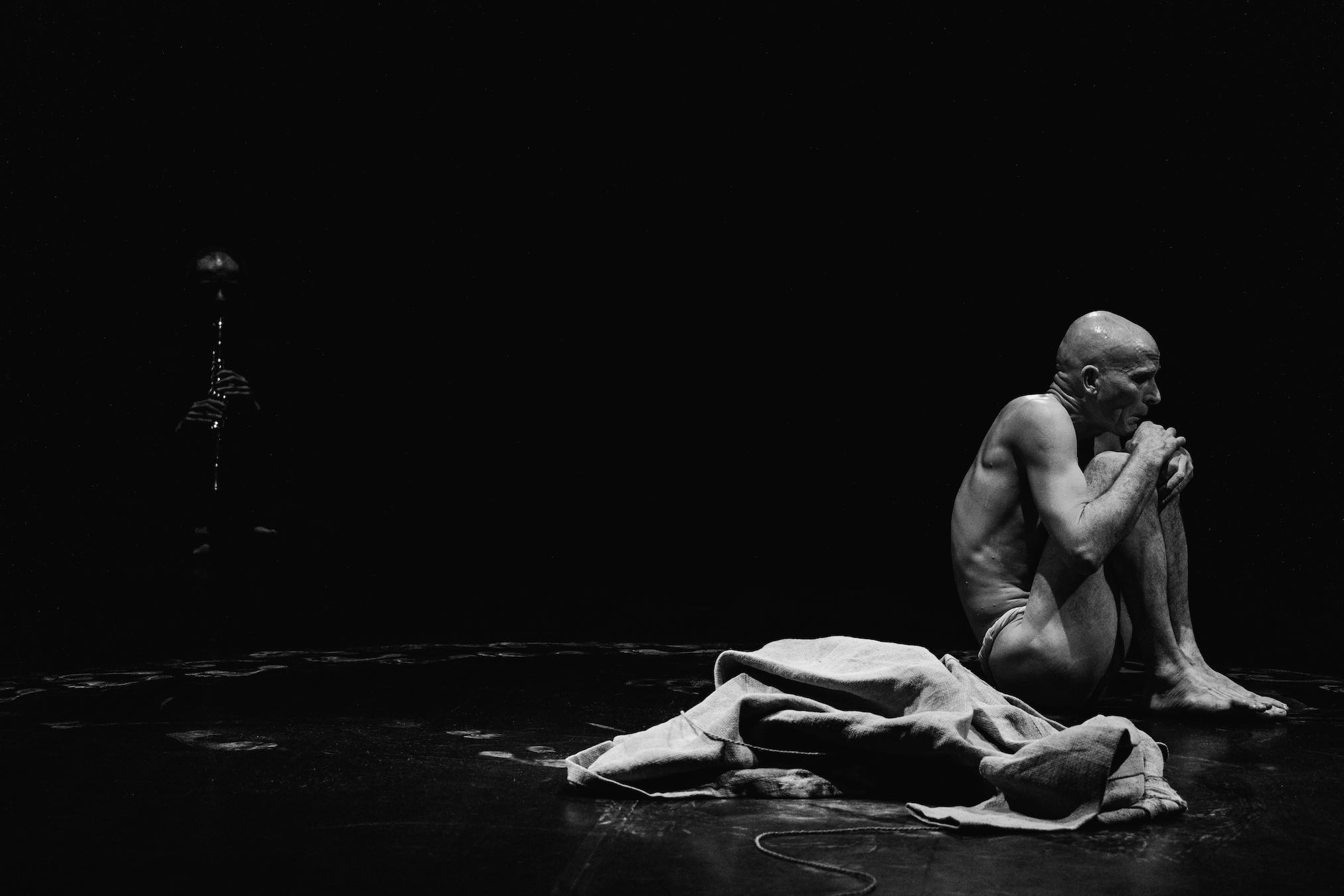 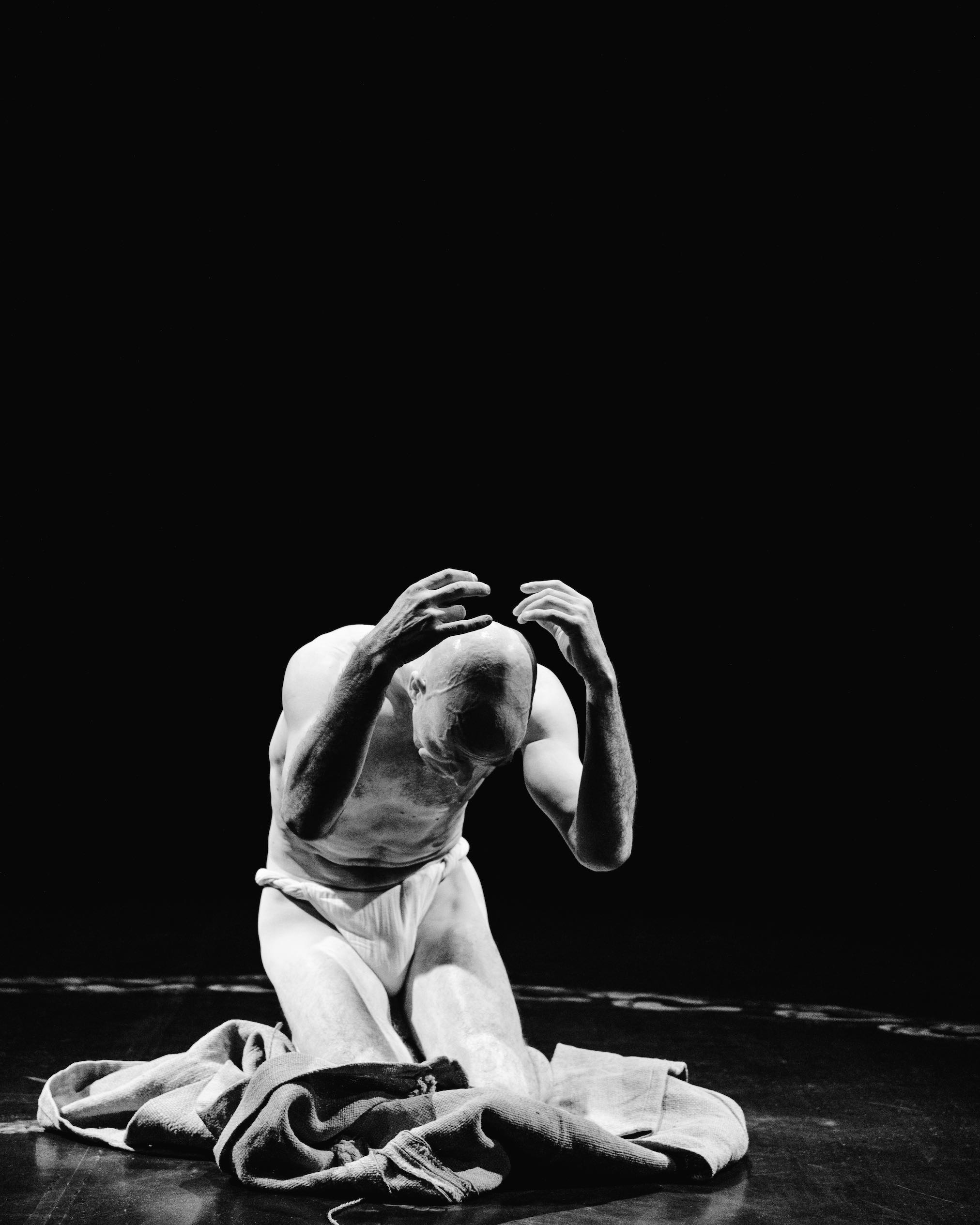 Simona Frigerio, Teatro Akropolis, 13. November 2021, Genova
The Chela, the Saint, Father Sergius von Tolstoy or the Jedermann enters and breaks through the door like a mystic in the church, like a newborn in the womb. The Buddhist monk always has little with him, a bowl and the rope that surrounds his hips: is it the fisherman's soul / human net that he is casting? The christological reference returns and directs me to the next image that transforms into Pasolini, sacrificed on the altar of truth, the antihero par excellence of Italian bigoted communism of the 1970s, who denounced the dictatorship of the righteous before going into the open Sewer of a putrid and rotting Italy was stoned.

I detach myself from the here and now in order to grasp the key to the problem, to that life that the mystic contemplates and the antihero wants to leave behind - finally free from duties and burdens. "You only leave footprints in the sand that are wiped out at high tide," I read years ago on a mural on Tao Island. But can one be free by depriving oneself of the other?

When Thormann squeezes out his robe - like Linus his blanket - I feel my heart sink, and another antihero appears. The romantic Che - like all revolutionaries - real, or sensitively sublimated by Soderbergh, who does not believe in God, but in people. He knows that he can lose and remembers: "If you don't fight, you have already lost". But David will never defeat Goliath. Capitalism, which imposes schedules and rules on you to sell your life against the illusion of security, also convinces you that belonging and conforming to the system is the only possible world.

For a moment the man is mistaken that he could become a sparrow - but the flight is short. The inherent femininity causes us to tear ourselves apart. The monolith from 2001: A Space Odyssey has not yet discovered the primacy - it prevails or it succumbs. And then it is necessary for Sisyphus to take on the weight of the world, this humanity who beats like a moth against walls that do not seem to exist because they are made of transparent glass, but withstand every effort and extinguish the last flap of their wings. Marilyn Loden's ceiling will also be made of crystal, but we can't break it.

How can one renounce humanity without renouncing one's own humanity?

The piper who is leaving is the one from Hameln (from the Brothers Grimm). And we follow him like mice towards the abyss. I feel like I've been holding my breath for 50 minutes and now when I return to breathing I feel alive like I haven't in centuries. Antonin Artaud theorized that the theater, like the plague, appeals to "forces that lead the mind back to the source of its conflicts by example". Theater is revelation because it "urges people to see themselves for what they are, to drop the mask, to expose lies, to laxity, baseness and hypocrisy". Imre Thormann realizes these theories on stage in a close and punctual dialogue with the clarinetist Pierre Lassailly - transformed into a narrative that needs no words because they are inscribed and engraved on the body (even without the tinsel of fake blood) - in the emphatic and revolutionary contact of the meeting bodies.

Why does political power fear the public square and the theater? Because men and women who manifest, who share an aesthetic or ideal experience in a real physical space, can use the power of beauty to undermine the status quo. Thormann carries out a silent revolution with the power of sweetness.

The rest is silence.

Original in Italian
Luciano Ugge, Teatro Akropolis, 13th November 2021 Genova
Later we attend and participate, in the Sala del Minor Consiglio, in the performance of Imre Thormann - The false David, with the musical contribution, on the clarinet, by Pierre Lassailly. Recalled (announced) by the sweet sound of the instrument, a monk laboriously advances in his gait. Continue or stop, believe in your own possibilities or even retrace your steps: everything passes in the short blink of an eye. Life is a heavy burden that we try to share with others but, often, we fail to do so. The body tries to get rid of the weight but the bonds that bind us - really and metaphorically - are difficult to dissolve: we even try to throw them as if they were nets (to catch dreams?), But we always remain empty-handed. Our request for help seems to remain stifled: naked, but still weighed down, we attempt a more incisive impulse - perhaps stretched into an embrace - but without success, while Thormann's face fades from hope to pain to despondency. The music well supports these moments which, slowly, lead to the awareness of the difficulty, and perhaps the impossibility of sharing. Memories pile up, even visually and, around the head, the ties of painful memories seem to force us to an eternal return. Renunciation seems the only possibility but the burden, at this point, turns into the choice of a future of solitude. "Not being up to par" is the doubt that assails - "but of what?", One wonders. The inner path manifests itself externally in all its drama. And, as is customary in butoh, the dancer moves away, followed by the musician, without the need to receive those applause which, in the theater we are used to, are an outward gesture which, by now, is completely devoid of meaning - dispensed to anyone with the same ease with which we turn a channel at the end of a television program.

But Imre Thormann's works never have a real end, they continue to spin in the brain and recur - on an emotional level - even in the days to follow. At times, now we seem to almost grasp a miraculous catch which, however, does not turn into an epiphany. The net pulled on board is empty, but is it the human being who is not up to par or is it humanity that has lost that spirit of cooperation that was perhaps the reason for its development? It is said that those who sow wind reap storms. But in the silence of the world we realize that, often, waiting on the shore is no longer enough. The urge to participate and take up the challenge runs under the radar, leaving us with the anguish of not having done so. But tomorrow is another day.

Original in Italian
Jean Marie Gourreau, Espace culturel Bertin Poirée, Paris, 16 & 17 Mai 2019
The Butoh Festival 2019 has just opened its doors at Espace Culturel Bertin Poirée in Paris with the performance of a fascinating dancer, still little known in France, Imre Thormann. Through the character he embodies, The False David, he brings us the vision of a Butoh who is different from the one that the forerunners of this art, Tatsumi Hijikata and Kuazo Ohnô, left us.
The fake David embodied by Thormann is not a hero of the legend as he specifies it, but a traveler that any of us could be. He is a being “whose pain of birth sounds like an infinite echo; a kind of phantom that arises from our shadow, searches for itself and tries to find its reason for life and existence.

The poignant images that are born under his gesture tell of fear, oppression, sadness, pain, and even death. They are reflections of the soul of a character who has suffered and who is still suffering from a being who seeks spiritual renewal, guided, embraced and entwined by the thread of life, the umbilical cord, delicate and fragile as it may be. A body that tries helplessly to rebel against adversity, spins in circles, but keeps returning to where it started. His dance is the dance of life with all the questions it can raise, whether material or philosophical. He translates the images that emerge from his subconscious in order to capture them, to understand them, to listen to them, to think about them, to react to them without, however, opposing them. Movement always goes hand in hand with emotions in his dance.
Kazuo Ohnô once said that "dance is the prayer of instinct". Through this instinctive prayer, Imre says, we can access the inner forces that move us and discover what it is like to live.

Original in French
Julia Niedziejko, Teatre Kana, Szeczin, Poland, 19. April 2019
Where is the beginning and where is the end of the circle?

During the discussion between Imre Thormann and the audience about the piece “The False David”, Imre Thormann turned out to be an advocate of mysticism. He gave broad and ambiguous answers, as if words could demystify his spectacle with carefully constructed dramaturgy. Like a Buddhist master, he maneuvered between natural metaphors and affirmed self-awareness and stoicism. No wonder Thormann lived in Japan for many years, where he researched the secrets of the Butoh dance under the watchful eye of Master Kazuo Ohno. The influence of his master was clearly visible in the project presented in Kana.
I had the impression that the answers that Thormann gave the audience during the conversation did not so much explain the topic of the performance itself, but gave the audience an overview of the artist's creed.

It is a presentation by an actor who, in motion, interweaves a web of meanings. The formal minimalism he used emphasized the simplicity of the smallest gestures full of symbolism. The rhythmic wandering along the circular path, which was the only stage design element of the performance, can be freely crossed with numerous associations. There are no contemporary contexts, no bundle of academic discourses, no obvious cultural references. The title The False David is an archetype of a man whose journey illustrates the clashes on many planes of existence.